Adam Schiff: What I learned in Kyiv: 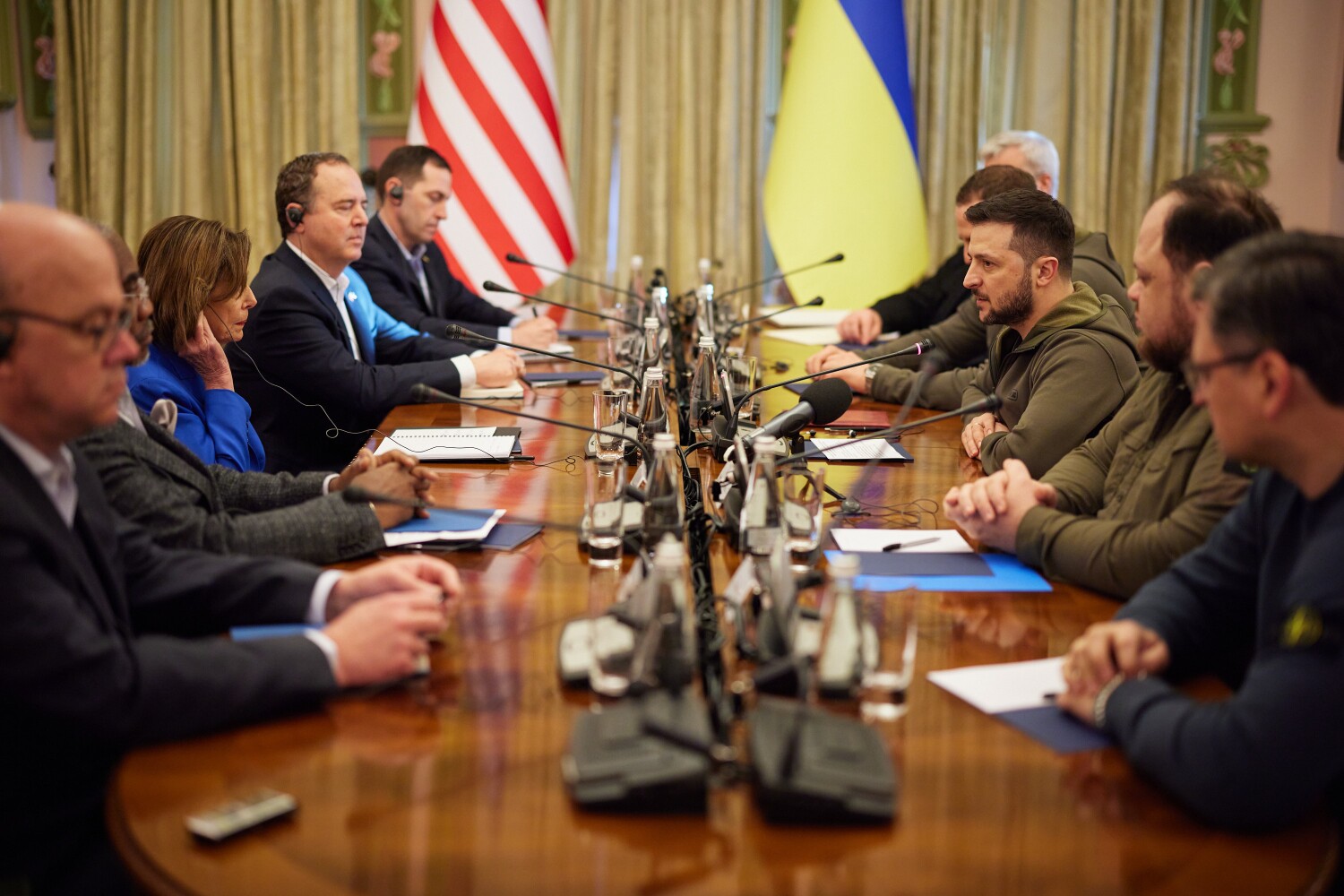 I returned on: Monday from traveling to Ukraine with a congressional delegation led by House Speaker Nancy Pelosi. We met with Ukrainian President Volodymyr Zelensky and his top national security team in Kyiv for almost three hours.

Zelensky is a remarkably impressive wartime leader. His grasp of the military, civilian and humanitarian issues facing his country is extraordinary. Although it was our first meeting, I felt I knew him because of all I’d learned through my role as lead House manager in Donald Trump’s first impeachment. This was the man Trump tried to shake down by withholding hundreds of millions of dollars in military aid unless Zelensky granted him a now-infamous political “favor.”

In Kyiv, I was once again struck by the depravity of that act – preventing military aid from getting to Ukrainian soldiers when they were already fighting the Russians and Russian President Vladimir Putin, and dying every week. But I was struck by something else as well: Zelensky’s first major engagement with the United States must have caused him to question American values, and whether all global diplomacy would be characterized by such shameful transactionalism.

But Zelensky was not cynical. He was focused on his country ongoing need for humanitarian aid, economic relief and military assistance in a war that is entering a new phase.

When Putin first tried to overrun Ukraine and install a puppet regime in Kyiv, his forces were spread out, their tanks and other armored vehicles could be ambushed by Ukrainian troops who knew the terrain much better than they did. Now the Russians have consolidated their firepower in eastern Ukraine, the Donbas region, chiefly the cities of Donetsk and Luhansk, hoping to encircle Ukrainian forces and annex that territory. The fighting is more at a distance now, and Ukraine has a desperate need for long-range artillery such as American-made howitzers. We have already provided dozens and promised more, and we should do even more, including arming Ukraine with multiple rocket launchers that can be even more effective than howitzers in combating Russian firepower.

As chair of the House Intelligence Committee, I discussed with Zelensky the vital intelligence cooperation between our two countries. The Biden administration skillfully declassified key intelligence about Russian plans and intentions before the outbreak of war, stripping away any pretext the Russians could later claim for the invasion and helping to speedily unite NATO and our other allies around a punishing set of sanctions.

The strategic sharing of information must continue to give Ukraine the insights it needs to identify Russian troop movements and to deter Russian escalation, including the use of chemical or biological weapons. Intelligence community efforts are also critical to discouraging China from aiding Russia by evading sanctions or providing military support. President Xi Jinping must be made to understand that while he may be able to help the Russians, he cannot do so clandestinely. China’s role will be exposed, and Xi will have Ukrainian blood on his hands for all the world to see.

The trip underlined to me that the war in Ukraine is a humanitarian crisis. The Ukrainian people have been subjected to horrific war crimes, including the killing of civilians, rape of Ukrainian women and girls, and forced migration to Russia of Ukrainian children and families.

The repercussions are felt not just in Ukraine. The Russian invasion is causing a global food crisis. Ukraine is the breadbasket of Europe, and its inability to export its grain through the port of Odesa – blocked by the Russians – may cause starvation in Africa and elsewhere. Zelensky requested Harpoon antiship missiles to destroy the Russian Black Sea fleet and reopen the port. We should provide them. Smart and innovative, the Ukrainians have manufactured their own land-to-sea missiles, even sinking the Russian flagship Moscow, but American capabilities are much greater, and they should be shared.

The Ukrainian people are fighting valiantly to defend their homeland, its sovereignty and its aspiring democracy against one of the world’s most capable militaries. Russian forces have been stymied in their greatest ambition – a quick takeover – and are now fighting and losing a grinding war of attrition.

No matter Ukraine’s valor, every day that Putin’s war goes on means more death and suffering. Tragically, the fighting will not end until he concludes he cannot conquer the Ukrainian people.

We can help speed that end by helping Ukraine defend itself, providing generous aid to the war’s many millions of refugees and tightening sanctions against Russia until it can no longer afford such brutality.

Not since World War II has a European power launched such an unprovoked war on its neighbors – arrogantly seeking to subjugate a sovereign nation and remake global borders through military might. America was the arsenal of democracy in that previous fight, and we have been thrust into that role again.

We must not, and will not, take any step to provoke a direct confrontation of our forces with the Russians, but we should do all we can to hasten the war’s end and Ukraine’s survival. In the latest struggle between freedom and oppression, we have a historic and vital role to play in freedom’s defense.

Adam B. Schiff, a Democrat, represents California’s 28th Congressional District and is chairman of the House Permanent Select Committee on Intelligence.