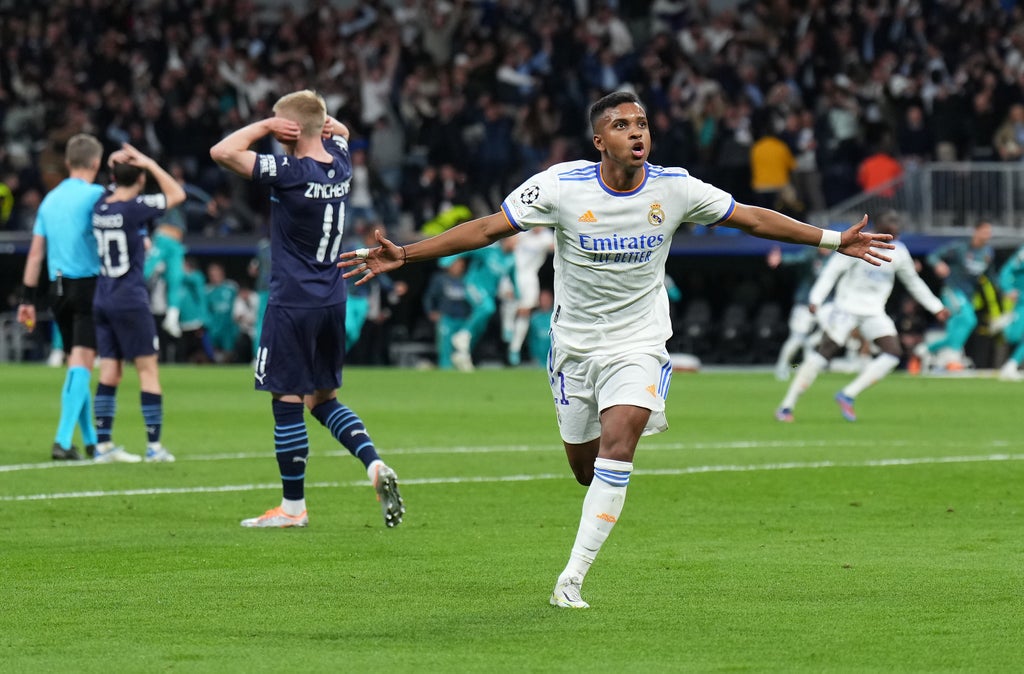 After an absolute thriller at the Etihad last week, Real Madrid and Manchester City do it all again tonight at the Bernabeu in the Champions League:.

It’s goalless at the break in Spain, after a tight 45 minutes. Bernardo Silva went closest to opening the scoring as he was denied by Thibaut Courtois.

It’s the second leg of the semi-final tie, with the sides playing for the right to face Liverpool in Paris at the end of the month.

City were on top for large periods of the first leg, taking a two-goal lead on three occasions, but Real did enough to stay in it and Karim Benzema:‘s panenka saw the match finish 4-3 to Pep Guardiola’s side.

It’s a match-up between the two sides with completely contrasting European history – Real Madrid are the most successful club in the competition’s history, while City are still searching for their first Champions League success.

With James Robson in Madrid and kick-off at 8pm BST, follow all the action with Standard Sport’s LIVE blog below …

James Robson at the Bernabeu:

You have to give it to the crowd in here. They have been magnificent throughout and never gave up. They celebrated six minutes of added time like it was a goal. There was no way they were going to give up on this tie.

99 mins: Fernandinho with a chance in the box, blasts it over the bar.

Sterling on for Rodri – City have to throw everything they can at Real now. Wouldn’t back against there being more goals in this …

Deep into the box, Asensio smashes it away. City suddenly have it all to do.

BENZEMA SLOTS IT PAST EDERSON!

No panenka, but it’s just as cool. Side foots it into the bottom corner as Ederson dives the other way.

Rodrygo bursts away out wide, plays it low into the box. Benzema flicks it away from Dias and goes down … PENALTY.

Referee did not hesitate.

Vinicius charges away down the left wing, cuts it back to Benzema who has held his run at the edge of the box. Straight at Ederson, who gathers at the second attempt.

We’re up and running in extra-time.

Who knows what we’ll get in the next 30 minutes!

We’re going to extra-time … you heard!

Rodrygo with two goals in less than two minutes in the closing minutes to level it up in astonishing circumstances.

How does Guardiola pick his side up now?

90 + 6 mins: We are now at peak chaos. Both sets of players just throwing themselves at everything.

Valverde flies into Fernandinho and that will be a yellow card for the Real man. Gives everyone a chance for a breather.