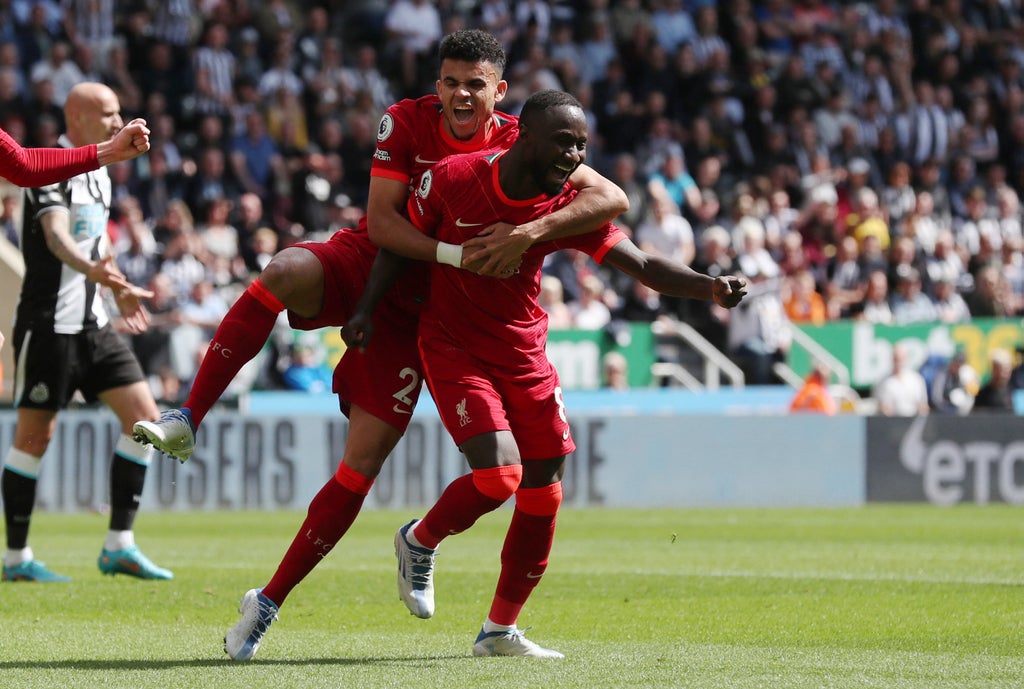 Klopp:: ‘my new contract will hopefully influence Salah and Mané to stay’

Liverpool: travel to: Newcastle: hoping to climb above Manchester City at the top of the: Premier League: table – temporarily at least.

With their title rivals not due to play until later on Saturday, Jurgen Klopp:‘s side can pile the pressure on as they continue their title pusuit at the business end of the campaign.

There were few signs of weariness in a comfortable midweek: Champions League semi-final first leg win over Villarreal:but Newcastle will be hopeful of continuing their own recent good form against a side facing a short turnaround.

The quadruple is still a realistic target for the Reds and victory at St James’ Park would cap a seismic week that has also seen Klopp sign a contract extension until 2026: and talisman: Mo Salah: named: men’s Footballer of the Year by the Football Writers’ Association:.

Follow all the action from a crucial game at St James’ Park below:

55 mins: Shelvey tries his luck but Milner was crouching down to the side of the wall and managed to head it away from danger. The Liverpool midfielder has stayed down. Play is stopped.

54 mins: Guimaraes finds Saint-Maximin with an intelligent pass into the right channel. The Newcastle man’s first touch is poor and Matip can nick it from under his feet before drawing a free-kick for Liverpool.

The home fans are furious but moments later win a free-kick of their own as Matip commits a foul. This is Jonjo Shelvey range. Left of center, 25 yards from goal.

52 mins: YELLOW! Willock turns Gomez on the touchline and the Liverpool defender cynically brings him down. Gets a yellow card for his troubles.

52 mins: Liverpool break at the other end as Jota lays it off to Diaz and his effort deflects behind for a corner.

Milner sends the set-piece into the middle and it drops for Keita but his shot is blocked by Shelvey.

50 mins: Almiron finds some space on the flank and sends a wicked delivery into the box which Matip does well to head clear.

Saint-Maximin then tries to dribble beyond three Liverpool shirts on the edge of the box but Milner does enough to ensure he loses control of it.

48 mins: Gomez drives down the right and pulls the ball back for Diaz but he can not get it under control and Willock pinches possession. He drives out of his own box and Keita commits the foul.

Liverpool dominating the ball again in the opening minutes of the second half.

46 mins: Back underway at St James’ Park. Liverpool get the ball rolling for the second period.

The players are back out on the pitch. We are nearly ready for the second half. Can Newcastle do anything to halt this remarkable Liverpool run?

Not that you need reminding, but Liverpool will move two points clear of Manchester City at the top of the Premier League table with a win here at St James’ Park.

Manchester City then have the opportunity to respond at Elland Road against Leeds this evening.

Newcastle are still in this game. But with Mo Salah, Trent Alexander-Arnold, Fabinho, Thiago, Harvey Elliott and Curtis Jones all on the substitutes bench, it does look rather bleak.

Such strength in depth now for Klopp.