Taylor vs Serrano one of the biggest fights of all time, Eddie Hearn claims: 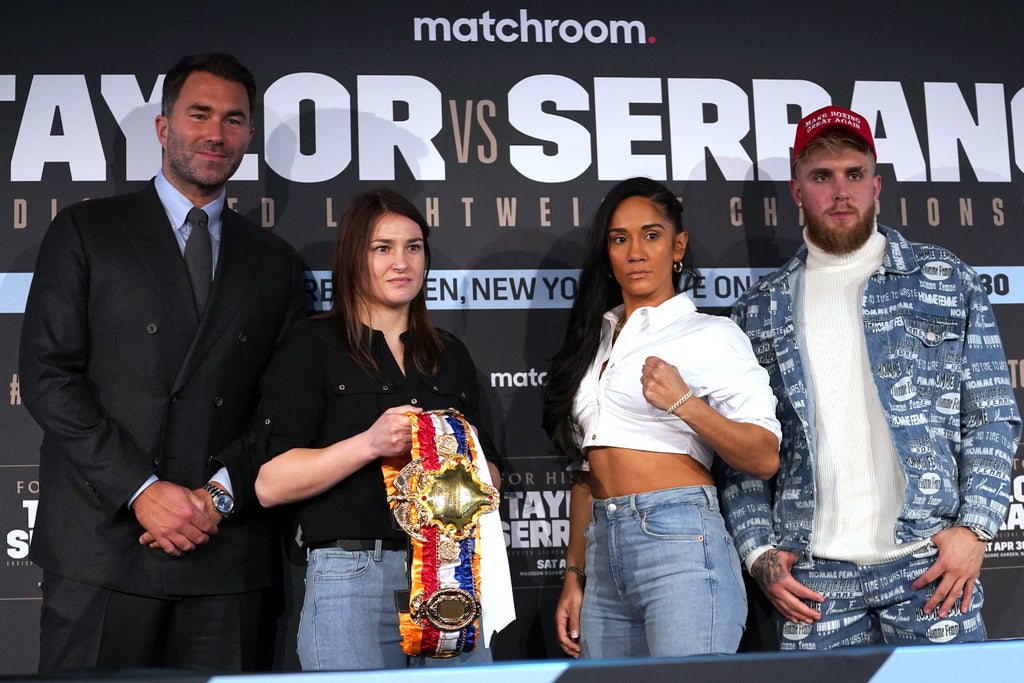 Eddie Hearn: is convinced: Katie Taylor:‘s showdown with: Amanda Serrano: at Madison Square Garden “will blow the doors off women’s boxing and boxing in general”.

Taylor, the darling of Ireland, and Puerto Rico’s seven-weight champion Serrano will make history on Saturday as the first female boxers to headline at New York’s iconic venue.

“I’m so confident in the fight itself that if it’s the fight I’m absolutely convinced it will be, it will blow the doors off women’s boxing and boxing in general.

“It will just be the start of so many big, major fights for females.”

Saturday’s match-up, described by Hearn as “a historic game-changer”, has been years in the making, ever since London 2012 gold medal winner Taylor turned professional in 2016.

It was originally scheduled for May 2020 in Manchester, but was scuppered by the pandemic coronavirus.

The winner will be universally accepted as the best pound-for-pound female boxer on the planet.

“It’s the undisputed champion against a seven-division champion. It’s kind of like the Mayweather-Pacquiao of women’s boxing, ”Hearn said.

“But also, I feel with the emergence of women’s boxing, this is raising the bar to a level that will allow all those other big fights to become bigger.

“It will inspire a new generation of women fighters as well, not just at grassroots level, I’m also talking about professional level.”

“That was a watershed moment and this will be the same,” he said.

Both boxers are set for a reported six-figure payday, while an 18,000 sell-out crowd is expected and Hearn wonders at the progress women’s boxing has made since he chose to champion it over a decade ago.

“Katie sold me the dream, like she did to the International Olympic Committee all those years ago to try and get female boxing into the Olympics,” he said.

“She made me a believer and we’ve done one per cent of the work compared to what she’s done.

“It will be a very proud moment to see her ring-walk on the night. We were laughed at when she made her professional debut at Wembley. ”

Taylor’s critics claim her ‘legacy’ fight has come too late in her career and that she was far from her best in her previous two bouts, points wins against Firuza Sharipova in December and Jennifer Han last September.

The Bray Bomber revealed last month that she had been hindered in both of those by a calf injury and Hearn insists on Saturday she will deliver her best.

He added: “I just have to say ‘watch this’. I promise that’s all I’ve got to do. Just watch it and talk to me after.

“I’d never back against Katie Taylor, but I do think it’s a pure 50-50 fight. The brilliance and speed of Katie Taylor against the power and a smart fighter in Serrano.

“Serrano is convinced she will stop Katie Taylor. It’s going to be a ding-dong battle. ”