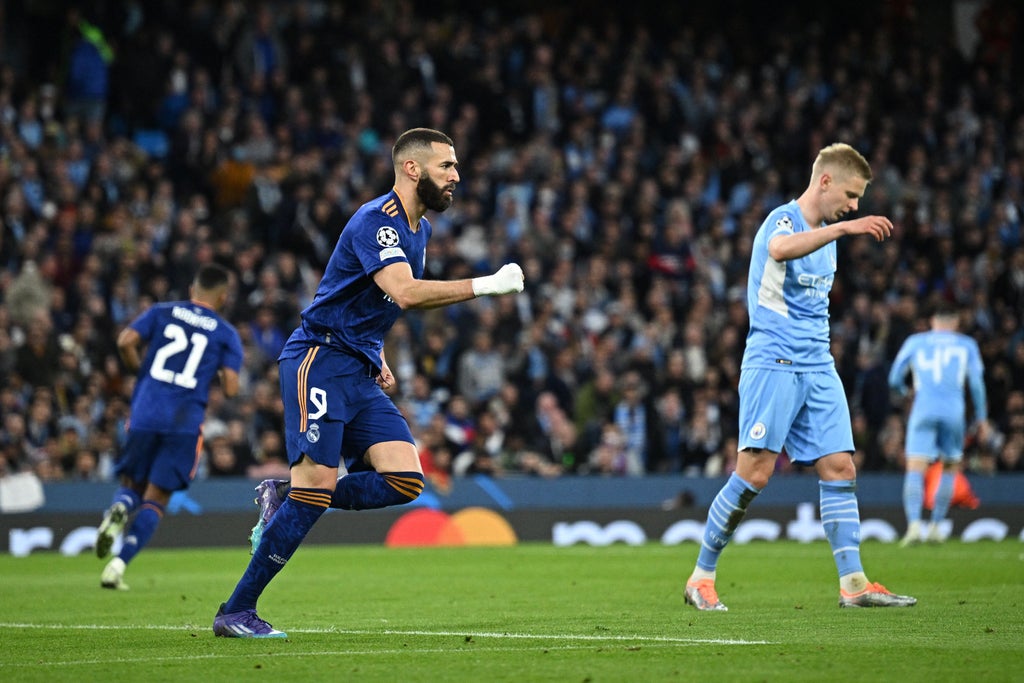 Manchester City continue their path to what they hope will be a first: Champions League: triumph when they host Real Madrid tonight at the Etihad. It’s the first leg of the semi-final clash, with: Pep Guardiola:‘s looking to take a lead into next week’s reverse fixture in Madrid.

City have already taken out one La Liga side, narrowly beating Atletico Madrid in the last round in what was a largely ill-tempered tie. Real meanwhile have experience of getting the better of an English team, having knocked out Chelsea in the quarter-finals.

It was not entirely convincing though from: Carlo Ancelotti:‘s side – at one point they found themselves 3-0 at the Bernabeu and on the verge of crashing out. But Real, who have effectively wrapped up the league title this season, did just about enough to edge through into the last four.

It promises to be a thrilling tie, between the most successful team in the competition’s history and one that looks to have everything required to lift the trophy for the first time.

With kick-off at 8pm BST and James Robson at the Etihad providing expert analysis, follow all the action with Standard Sport’s LIVE blog below …

What a start it was from City …

Well that was fun!

City were irresistible in the early stages and took a 2-0 lead with barely more than ten minutes played. De Bruyne and Jesus with the goals.

They should have extended that lead further, but wasted their chances.

Benzema made them pay with this 13th Champions League goal of the season to get Real right back in it.

45 mins: Kroos with the foul right on the verge of half-time and it’s a free-kick in a dangerous position.

De Bruyne lines it up, straight into the wall. Not what he had planned. Just the one minute added on.

44 mins: Brilliant skill from Jesus to beat Militao and get to the byline. Wins a corner for his side.

Militao puts that embarrassment behind him though to launch himself into a diving header that clears the danger.

James Robson at the Etihad:

This has been a wonderful half of football. City absolutely irresistible and Real showing that knowhow to stay in it. No one picks their moments like them.

The tie should be over, yet it’s back in the balance thanks to Benzema’s goal. In truth, the Spanish side might think they should be level, with Alaba wasting a golden chance.

41 mins: Bernardo Silva drifts away from Vinicius, who shoves the City man to the ground. Can have no complaints about the free-kick being given – does not stop him trying though.

Good position for Mahrez to whip this in, on the right wing. Plenty of pace on it towards the far corner, Courtois punches it away.

38 mins: Ball curled into the Real box, falls for Mahrez at the back post but the whistle has gone. Referee feels that Jesus had given Mendy a shove.

Real were second best for large periods against PSG and Chelsea in previous rounds, but hung on and got the job done. Their experience is showing again.

36 mins: Good delivery from the corner, Militao gets up and heads it over the bar.

City being forced into an early change. Stones, who clearly was not fully fit, is being replaced by Fernandinho.

Looks like it’s a straight swap. Vinicius will surely fancy his chances running at Fernandinho.

35 mins: All of a sudden Real look full of confidence, dominating possession.

Carvajal plays it inside and Rodrygo has acres of space. Drives into the box, drills it at goal. Straight at Ederson and he parries it behind. Corner.