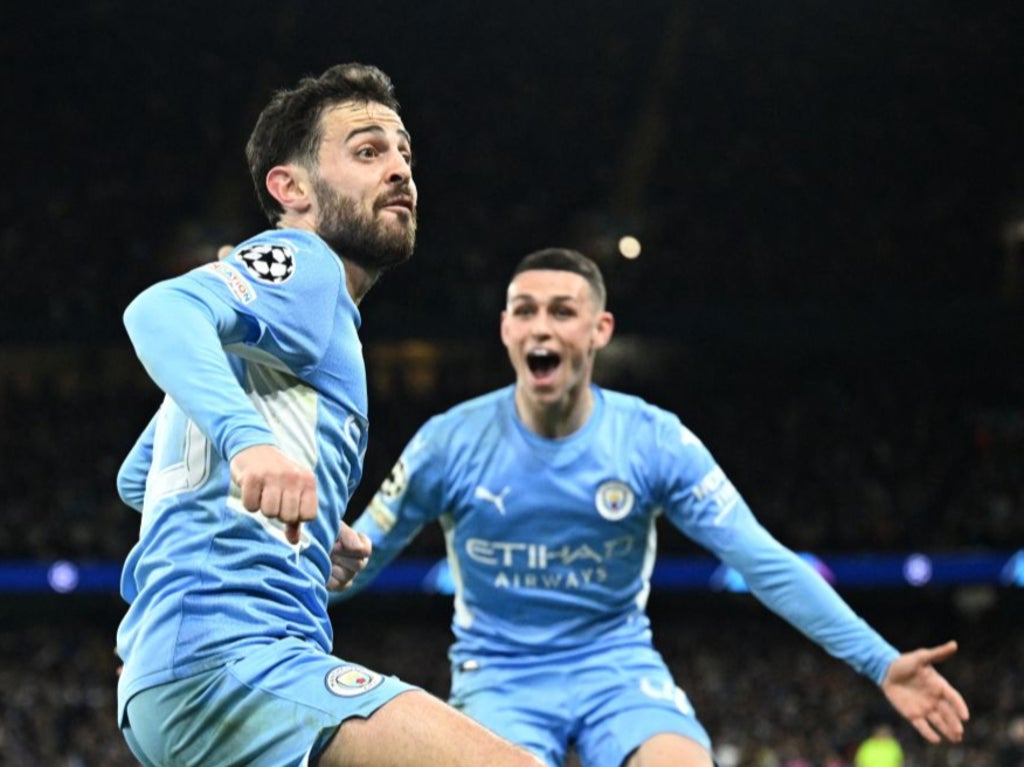 Follow all the action as: Manchester City: host: Real Madrid: in the first leg of their: Champions League: semi-final.

Pep Guardiola:‘s side held their nerve in a gruelling and fractious quarter-final tie against Atletico Madrid, with Kevin De Bruyne’s goal in the first leg proving enough to secure City’s path into the last four. Guardiola is worrying over the fitness of several key defenders with Joao Cancelo ruled out and: Kyle Walker and John Stones both missing training on Monday:leaving the City coach with a: conundrum over how to organize his back-line:. City will still come into the tie full of confidence, though, after a: 5-1 thrashing of Watford: at the weekend saw them maintain their one-point lead in the Premier League title race.

Madrid twice seemed on the brink of being knocked out of the tournament, first by Paris Saint-Germain in the last 16 and then Chelsea in the quarter-finals:but on both occasions the brilliance of: Karim Benzema: and Luka Modric somehow helped to haul: Carlo Ancelotti:‘s side over the line. The Italian was contending with two key injury concerns of his own but, while Casemiro has only made the bench, David Alaba has been deemed fit to start in a significant boost for Madrid. The Spanish giants have also had the luxury of being able to focus almost all their attention on this tie, with the club now: just one point away from securing the La Liga title:. Follow all the action live below:

After his hat-trick at Chelsea and brace tonight vs Man City, Karim Benzema is the first player in Champions League history to score as many as five goals away from home in the knockout stages against clubs from a single nation in a season.

90 + 3 mins: Nacho is shown a yellow card right at the end of the match. Foden whips in a corner that Militao heads to Asensio. He wins a throw in for Madrid.

The final whistle goes! Manchester City have victory and take a one-goal lead to the Bernabeu for the second leg. That game is going to be played in a similar fashion to this one tonight. There’ll be goals galore and City’s lead may be vital for them to progress.

88 mins: Marco Asensio replaces Vinicius Jr for the final few minutes. Real Madrid are hunting down the equalizer with City still trying to get themselves a bigger margin of victory. Neither team is giving up ground.

85 mins: Raheem Sterling has come on in place of Gabriel Jesus. Manchester City still have a slender lead as Sterling fouls Kroos deep in Madrid’s half.

Chances! How close to City need to get. They whip the ball twice into the box and both times see the ball just evade the men in sky blue as they throw themselves towards the pass.

82 mins: Benzema panenkas Ederson! He puts Real Madrid back within one! He’s the coolest man in the stadium.

80 mins: Dani Ceballos is coming on to replace Luka Modric for Ral Madrid. 10 minutes to play at the Etihad Stadium.

Penalty to Real Madrid! Oh my days, what a game. Aymeric Laporte is punished for a handball in the box trying to defend a cross.

77 mins: Chance! Riyad Mahrez shifts onto his left foot and fires a shot across the edge of goal! How has that not gone in? Man City have the momentum again.

74 mins: What a goal from Bernardo Silva! Man City keep possession and push Real Madrid into their defensive shape. The ball comes over to Oleksandr Zinchenko who darts inside from the left and gets cleaned out by Toni Kroos just outside the box. The ball comes loose to Bernardo who shifts it around Dani Carvajal and smokes his effort into the back of the net beating Thibaut Courtois at his near post!

70 mins: Eduardo Camavinga comes on to replace Rodrygo for Real Madrid. Can he have an impact on this game for the visitors? 20 minutes to go at the Etihad.