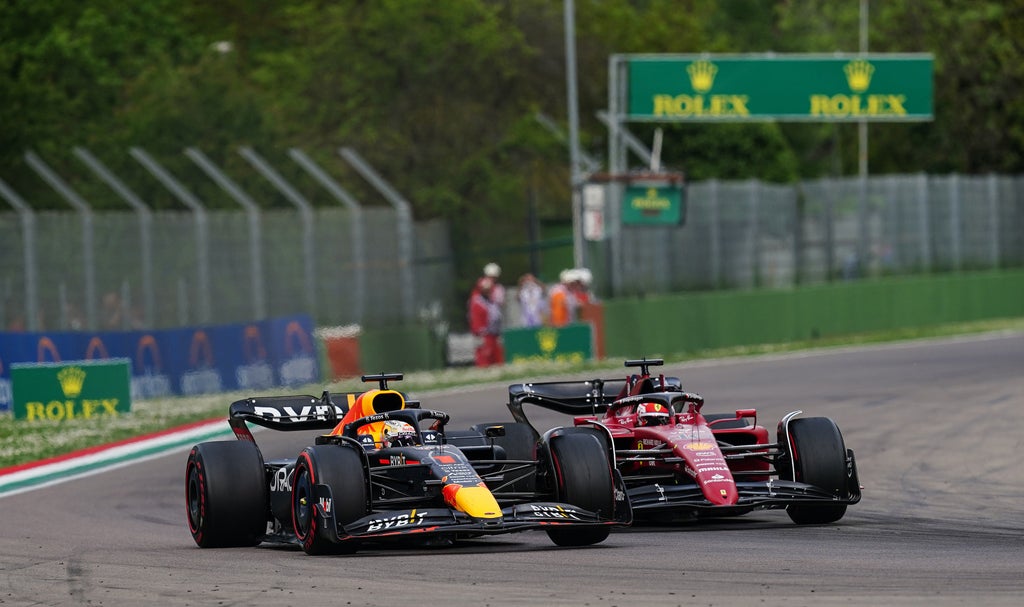 “Awesome week everyone. Nice to see how much we’ve turned it around. Proud of you all. ”

Perfect afternoon for Verstappen, controlled that race from start to finish. And on Ferrari territory, it’s a Red Bull 1-2 as Perez comes home in second.

Russell finishes fourth, another superb result for him in that Mercedes. Bottas fifth, Leclerc sixth.

62/63: Norris just a couple of laps away from another podium, he’s kept himself out of trouble perfectly this afternoon so far.

Russell is just about holding on for now, doing everything he can to make the car as wide as possible.

Here comes Leclerc … past Tsunoda comfortably. Up into sixth and that’s as good as it will get.

61/63: Leclerc is flying towards Tsunoda, gap is under two seconds.

Bottas right behind Russell … Mercedes man defends well. And Leclerc is now within a second of Tsunoda, he should get that move done before the end of the race.

60/63: Leclerc gets past Vettel with ease and he moves up into seventh. Tsunoda four seconds ahead – can he make that gap up? It’s going to be tight.

Bottas is six tenths behind Russell. Mercedes tell Russell there’s going to be light rain for the last couple of laps. Building up to be a dramatic conclusion between these two.

He’s within DRS range with a few laps remaining. Doesn’t have to rush this, got to think he’s got a decent chance of pulling this off.

57/63: Leclerc tells his team the car does not feel great. Nothing they can do now.

He has to be aggressive now – though that’s what cost him a couple of laps ago. He was pushing to close the gap to Perez.

Leclerc past Magnussen, up into eighth. Vettel next up.

Meanwhile, Russell in fourth is soon going to have Bottas right behind him. Gap is about a second.

What a shocker this has proven for Ferrari, just after two weekends were gifted by Red Bull – they hand one back.

Thousands of groans go up at Imola! That’s an absolute disaster … he’s got back on the track but Norris has gone past him into third.

And there’s damage to the front wing! Leclerc has to come into the pits again – horror moment for Ferrari. He’s back out into ninth, behind Magnussen.