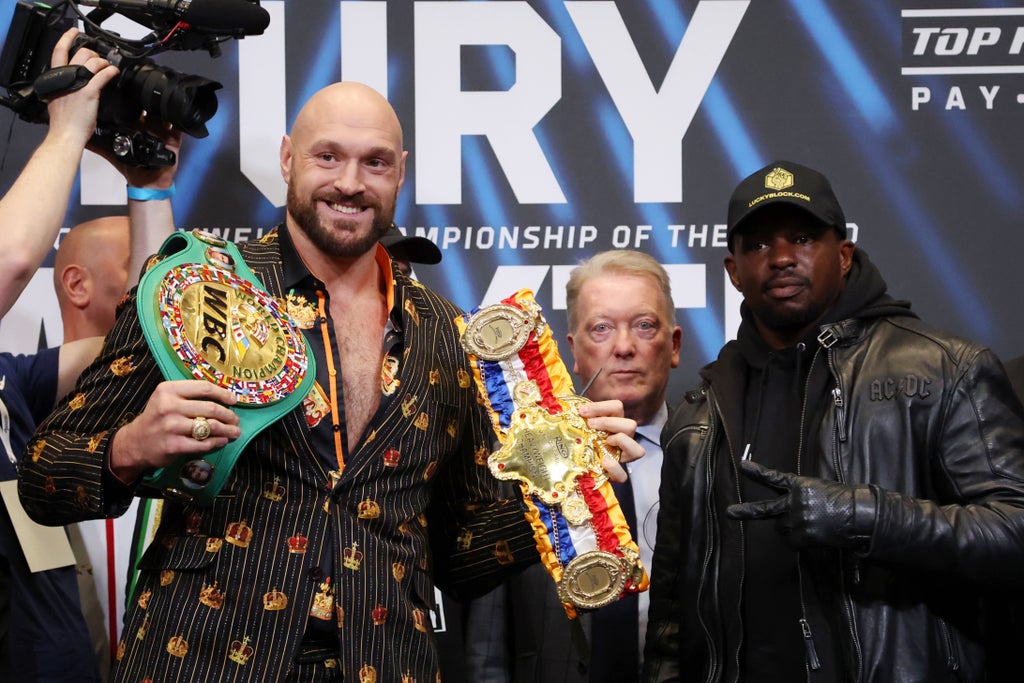 fter plenty of controversy in the build-up, the focus will at last be on the action inside the ring when: Tyson Fury: faces: Dillian Whyte: in all-British heavyweight clash at: Wembley Stadium: on Saturday night.

What started with a disagreement over Whyte’s split of the purse resulted in him not turning up for the initial press conference in March, before he also skipped the open workouts on Tuesday afternoon.

Whyte attended the press conference on Wednesday though, which was the first time he and Fury have come face-to-face in the build-up to this weekend’s hugely-anticipated bout.

Fury’s WBC and The Ring belts will both be on the line as Whyte finally gets shot at a world title, while the unbeaten champion is able to finally move on from the Deontay Wilder trilogy that has occupied him in recent years. That victory in October last year was Fury’s most recent fight, while Whyte has not been in the ring since avenging his loss to Alexander Povetkin more than 12 months ago.

With no rematch clause in the contract, a potential undisputed bout could be on the cards for the winner. Oleksandr Usyk currently holds the other heavyweight titles, with the Ukrainian expected to defend them in July against: Anthony Joshua:.

It’s Fury’s first fight back in the UK for more than four years and there will be 94,000 fans inside Wembley as he looks to defend his belts and maintain his place at the top of the sport.

Saturday’s undercard features his brother: Tommy Fury:, hoping to extend his record to 8-0 as he fights Daniel Bocianski in a six-round bout. It’s Fury’s first fight since he pulled out of a scheduled clash with Jake Paul at the end of last year.

Isaac Lowe is also in action, looking to bounce back from the first defeat of his professional career. The featherweight was stopped by Luis Alberto Lopez but returns against Nick Ball for the vacant WBC silver featherweight title.

Fury vs Whyte takes place on Saturday April 23, 2022 at Wembley Stadium in London.

The undercard is due to begin at 6pm BST, with ring walks for the main event expected at 10pm.

As ever, these times are subject to change depending on the length of the undercard bouts.

How to watch Fury vs Whyte:

TV channel: Fury vs Whyte is being broadcast live on Saturday night on BT Sport Box Office. The pay-per-view will cost fans £ 24.95.

Live stream: Those who have bought the PPV will also be able to watch the match online via the BT Sport Box Office website or app.

Live blog: You can also follow all the action as it happens with: Standard Sport’s live fight night blog:which will have coverage of the whole card.

For the first time in more than two and a half years, Fury will meet someone other than Wilder in the ring and it’s difficult to know what to expect.

The second and third fights in that trilogy saw Fury adopt a far more aggressive style than he has for much of his career, though that ‘Kronk’ influence did at times leave him more vulnerable.

Whyte may well be hoping that the pair do trade in the middle of the ring, as he’s likely to struggle should Fury decide to box and keep his distance. Staying within range and working Fury to the body will surely be a significant part of Whyte’s gameplan.

The two fighters have shown they are capable of getting up off the canvas and have impressive chins, so there’s every chance that both will have to come through difficult periods in the bout.

However, Fury has proved impossible to stop so far in his career and even if Whyte gets his opponent in trouble, it’s difficult to see him being able to do enough to finish the job. A stoppage victory for the WBC champion late in a thrilling fight looks to be on the cards.

Fury to win via knockout in round nine.

The fighters will weigh in on Friday afternoon – check back for the results then!

Odds via Betfair (subject to change).